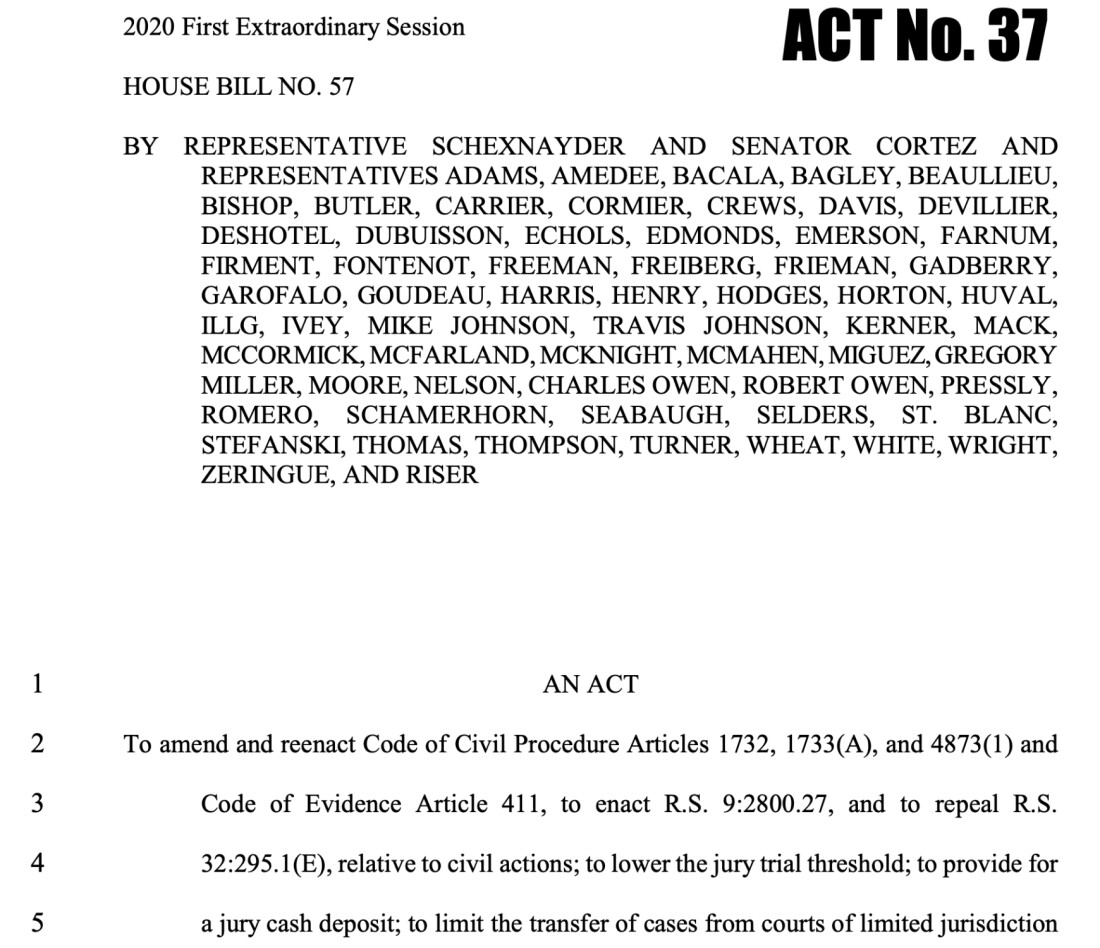 There has been a long movement for tort reform in Louisiana and although a more comprehensive bill was vetoed by the governor in June, a second bill has passed and has been signed into law—the Civil Justice Reform Act of 2020. Although the CJRA will surely spin off significant litigation, at first glance here are the basics:

The jury threshold has been lowered. The minimum amount in controversy to allow a jury has been reduced from $50,000 to $10,000. Louisiana's $50,000 cap was the highest in the nation, allowing the vast majority of automobile litigation in particular to be tried to the bench.

Since the Louisiana minimum auto policy is $15,000 per person, $30,000 per accident, this means that almost every suit will potentially allow for a jury trial unless the plaintiff stipulates that their damages do not exceed $10,000.

Where a plaintiff stipulates that their damages are between $10,000 and $50,000, however, the party requesting a jury will be required to deposit $5,000 within 60 days of the filed request otherwise the jury is waived. This is a significant change in the way juries are currently requested and paid for, because it requires the bond to be paid up front, rather than 60 or 30 days before trial. Thankfully, the Act by its specific terms applies prospectively from January 1, 2021.

Keep in mind that city and parish courts have jurisdictional limits that range from $15,000 to $50,000 depending on the particular venue, so we can expect some increase in filings before those courts on smaller cases. Any suit filed in Parish or City court with an amount in dispute over $10,000 is transferable to district court, but the transfer must be done within 30 days or a defendant will be forced to stay in the lower court for a bench trial. Whether this timeline applies only if there is a stipulation in the Petition, or where, for example, a party discovers evidence that the claim exceeds $10,000 (as in the "other paper" permitting removal to Federal court) is not clear from the wording of the Act.

District courts have unlimited jurisdiction, of course, so the decision to transfer such a case is a cost/benefit decision to be made quickly, after consulting with counsel as soon as possible.

Direct action. Louisiana is one of a few states where plaintiffs may sue an insurance company directly. Many plaintiff attorneys make sure to do just that, listing all insurers as the first named defendants so that the jury hears the case as “Plaintiff v. Insurance Company, et al.” Plaintiff's counsel also like to call defense counsel “the insurance company lawyer” during trial for that added dehumanization factor.

The CJRA prohibits mentioning insurance companies during the suit except under limited circumstances not typically found in third-party BI litigation. The judge will be permitted to instruct the jury at the beginning and the end of the case only that there is insurance, but not the amount or the name of the insurer.

Earlier drafts of the bill eliminated direct action altogether, prohibiting even listing the insurance company in the case caption. HB 57 does not include that language, so we will have to see how "not mentioning insurance" plays out if insurers are included in captions called out to the jury venire.

Recoverable medical expenses (collateral source). Currently the law in Louisiana allows recovery of reasonable and customary charges for medical treatment—not what expenses the plaintiff has actually incurred or spent. As a result, medical bills in litigation have exploded essentially unchecked, far outpacing the uncontrolled increase in medical expenses in general.

The new law essentially takes the calculation of most past medical expenses away from the jury. Plaintiffs will be entitled only to the amount actually paid by a health insurer or Medicare. If there is a contractual write off, the plaintiff can only recover the amount actually paid (plus deductibles). In what seems like a concession to the plaintiff bar, however, the judge may award up to 40% of this amount to the plaintiff as “cost of procurement,” as long as the resulting total damage award is not “unreasonable.”

The law also codified what has long been Supreme Court jurisprudence that if a plaintiff’s bills were paid by Medicaid, only the paid amount is recoverable.

The plaintiff bar also secured a carve out for past medical expenses not paid by medical insurance, Medicare, or Medicaid (i.e. the majority of chiropractic and other medicals guaranteed or advanced by plaintiff counsel). These expenses are recoverable to the extent of the amount paid “or remaining owed.” This amount will also be decided by the judge after the jury renders a verdict.

It will be interesting to see the standard applied to determine what amount is actually "owed," considering the common practice of negotiating medical invoices downward after trial or settlement. Expect an increase in "litigation medical financing" companies to ensure that the amount "owed" stays as high as possible.

Future medical expenses do not appear to be addressed by the law, so would anticipate significant litigation on this question, considering how much of most serious claims are for future medicals.

Seatbelt gag repealed. Current law prohibits introducing any evidence that the plaintiff was not wearing a seatbelt to argue comparative fault or mitigation of damages. That law has been repealed, so that evidence is now admissible, in line with several other states.

By its terms, the Act is prospective and "shall not apply to a cause of action arising or action pending prior to January 1, 2021." Considering ample case law stating that a cause of action accrues when a party has a right to sue, and a negligence cause of action arises when the wrongful conduct occurs and an injury is sustained, the language of the statute appears to make it inapplicable to any lawsuit filed in 2021 for a tort that occurred in 2020.

Defense practitioners should give thought to whether and when the Act will apply to cases filed against their clients. Serious, fundamental rights may be affected!