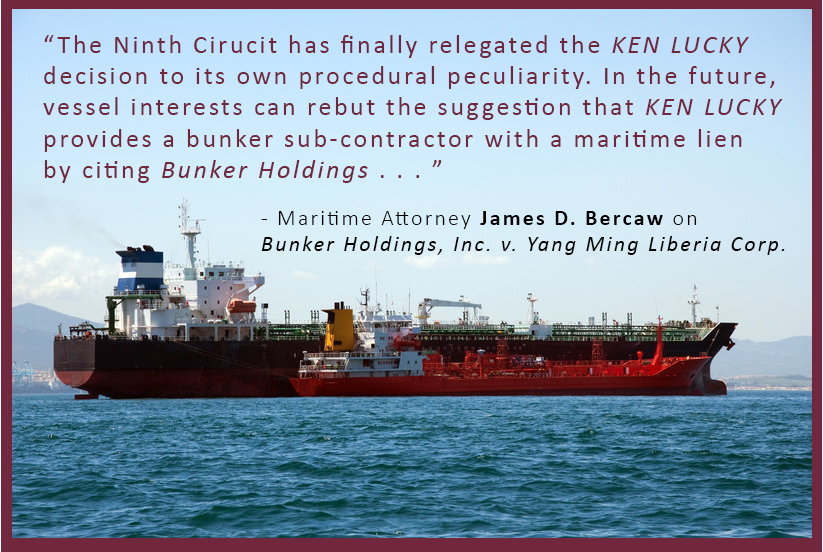 Recently, the Ninth Circuit revisited this issue in Bunker Holdings, Inc. v. Yang Ming Liberia Corp., No. 16-35539 (9th Cir. Oct. 11, 2018). The Ninth Circuit followed the prior decisions of the Eleventh, Second and Fifth Circuits in concluding that a physical supplier of fuel that received the fuel order from a bunker broker or bunker intermediary, and not the vessel owner or charterer, does not have a maritime lien against the vessel under the Commercial Instruments and Maritime Lien Act. Id. at 5.

Because that critical factual admission present in KEN LUCKY was not made by the vessel interests in Bunker Holdings, the physical supplier could derive no support from that decision. In other words, the Ninth Circuit has finally relegated the KEN LUCKY decision to its own procedural peculiarity. In the future, vessel interests can rebut the suggestion that KEN LUCKY provides a bunker sub-contractor with a maritime lien by citing Bunker Holdings and paraphrasing Judge Higginbotham’s observation in the ALMI SUN decision: “In determining the law of the [Ninth] Circuit, we prefer its own statement of the law.” ALMI SUN, 893 F.3d at 296.